Discrimination in Employment Layoffs During COVID-19 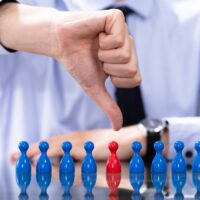 The novel coronavirus pandemic has wreaked havoc on the economy. Supply chains have suffered interruptions, shops were forced to shutter their doors for months on end, and employees have needed significantly more sick days to avoid spreading the virus. Many businesses have been forced to downsize as a means of cost-cutting, even with government efforts like the Paycheck Protection Program meant to curb layoffs. Unfortunately, some employers have used COVID-19 financial concerns as a pretext to terminate employees for more sinister reasons. Below, we discuss a few forms of wrongful termination and workplace discrimination that have been areas of special concern during the pandemic. If you believe you’ve been fired unlawfully, or if you suspect unlawful discrimination in your workplace, call a seasoned Riverside workplace discrimination and wrongful termination lawyer for help.

A number of recent studies have taken a hard look at labor market statistics during the novel coronavirus pandemic. As many companies have experienced significant layoffs, sociological researchers looked to determine whether there were any troublesome patterns in those layoffs, or if any groups have been disproportionately affected by COVID-era problems. Perhaps unsurprisingly, certain groups have been hit harder than others.

A Tufts University article entitled The Racial Gap in Employment and Layoffs during COVID-19 in the United States: A Visualization, for example, used regression modeling to compare gaps in employment during the calendar year 2020 across different racial and gender divides. The author found a “strong white male advantage in the likelihood of being laid off for post-outbreak months compared with women, black men, Hispanic men, and Asian men.” Non-white persons and women were significantly more likely to suffer layoffs.

Any employer that targeted protected groups for layoffs may be held liable for wrongful termination and unlawful discrimination. If you believe you were terminated based on your race, gender, or other protected characteristic, or if you believe your employer targeted certain groups in their layoffs, talk to a labor and employment attorney about your options for relief.

Age discrimination has also been a significant area of concern for COVID-19-era layoffs. Companies that use the pandemic as an excuse to fire older employees because they are higher salary-earners or are nearing retirement age may be committing unlawful age discrimination.

California and federal laws protect workers who are age 40 or over from adverse employment actions taken based on their age. If you’ve been included in a round of layoffs and you are within the protected age group, consider whether there is any evidence of discriminatory practices. Circumstances that can give rise to age discrimination concerns include:

If you have any cause to believe that your company fired employees because of their age, or for any other unlawful reason–race, gender, sexual orientation, pregnancy, etc.–consult with a California labor law attorney. Discrimination can be difficult to spot and harder to prove; an experienced workplace discrimination lawyer can help you root it out. You may have grounds for a wrongful termination or discrimination lawsuit on your behalf, or you may be able to bring a whistleblower claim on behalf of the government and your fellow workers.

For help recovering damages after a wrongful termination in Southern California, call Ochoa & Calderón to discuss your case with a skilled, passionate California labor and employment attorney. Call 951-901-4444 in Riverside or 844-401-0750 toll-free throughout Southern California.